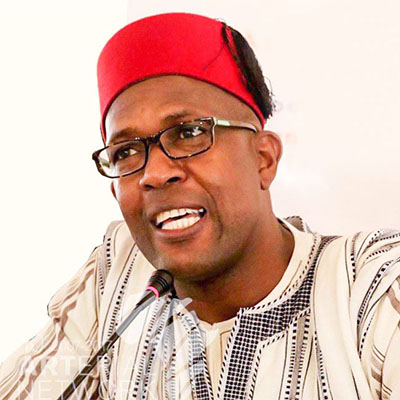 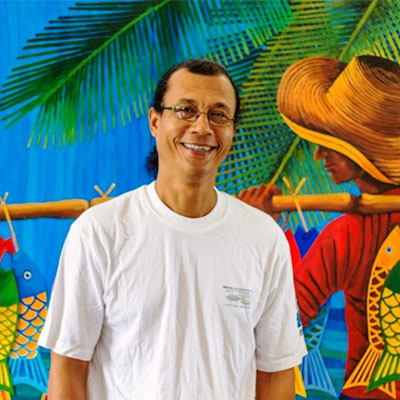 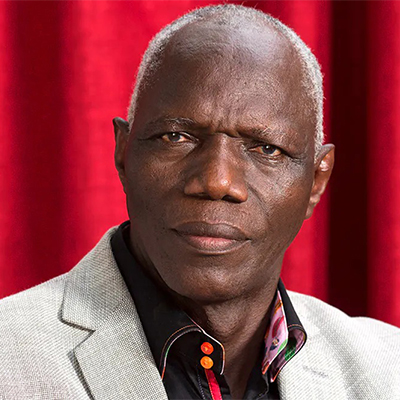 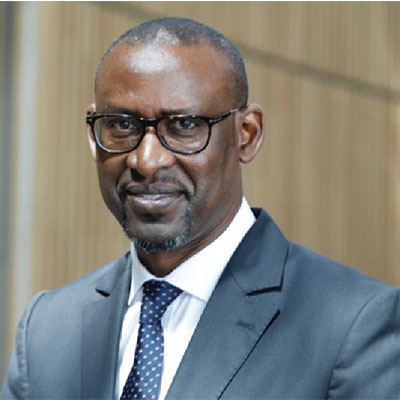 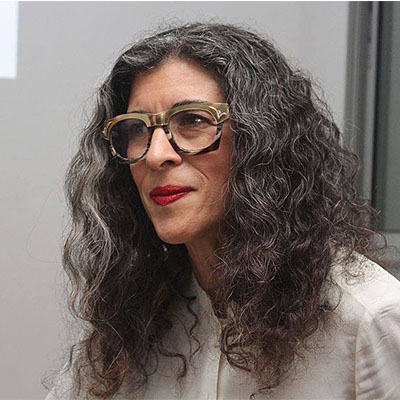 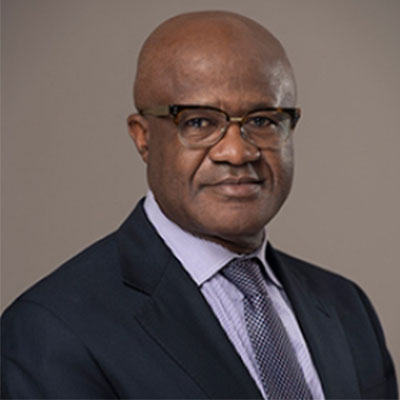 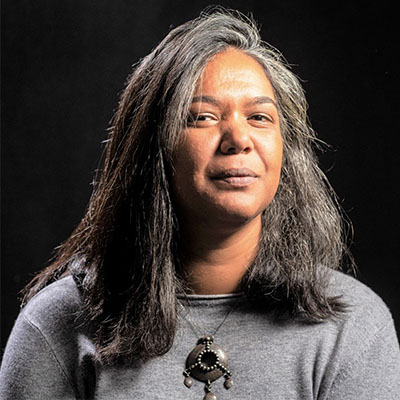 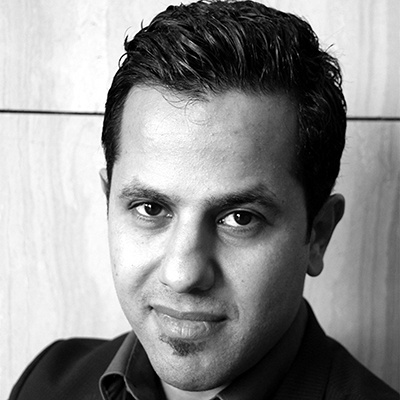 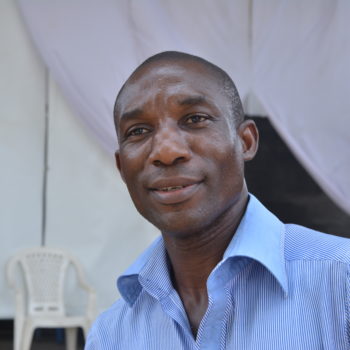 Social innovator, expert in art and Culture management, Mamou DAFFE is part of a new generation of social leaders whose mission is to design projects and local operations with a strong economic, cultural and social impact. In 2005, he founded the annual Festival sur le Niger. He is the initiator of the innovative entrepreneurial model “Maaya Entrepreneurship”. In 2011, he created the Centre Culturel Kôrè, with a resource center specialized in social art issues, and the IKAM training institute for capacity building of artists and cultural actors in Mali and beyond. After chairing the pan-African network of cultural actors – Arterial Network – from 2015 to 2017, he founded with the great artists and cultural actors of the continent the first African Culture Fund (ACF) in 2018, of which he became the first Chairperson.

George Camille is one of the most prolific and well-known visual artist in Seychelles.

In 1987, he established Sunstroke Studio, a design, fashion and screen print space that trained and employed more than 30 artisans and artists. He then established the first art gallery of Seychelles.

He has exhibited in numerous private collections around the world. He recently represented Seychelles at the Venice Biennale and is the winner of the recent Seychelles Biennale in 2017.

Dr. Frannie Léautier is one of the most illustrious African finance and development practitioners of our times.

As a professional, an academic, and an entrepreneur with a long-standing experience at top executive and board of director-levels, she has been in the business of leading and transforming organisations in the private, public and not-for-profit spheres, including in advanced and emerging economies around the globe.

She served as Vice Chair of the Board, first independent Board Director, and Special Advisor of the Eastern and Southern African Trade and Development Bank (TDB). Dr. Léautier became TDB’s Chief Operating Officer on September 1st, 2018.

She is the Chair of the Risk and Audit Committee of the African Risk Capacity (ARC Ltd), a company providing  market solutions to address the insurance needs of African countries against weather related risks likes floods and drought.

She is a well-recognised author and academic, having published numerous books, articles and papers in international development. She is also a graduate of the Harvard University Executive Development Program.

In addition to winning various awards, including “Best Manager” and awards for excellence at the World Bank Group, she has been featured several times amongst the New African Magazine list of 100 most influential people in Africa.

Manager of cultural projects, Ghita Khaldi is the founder and current president of the Moroccan association Afrikayna, for intercultural exchange, development and cooperation in Africa.

She was the initiator of the launch of the first Moroccan fund for artistic mobility in Africa – Africa Art Lines – from the same association.

Ghita is also in charge of the coordination and production of the L’boulevard Festival of Casablanca and the Jidar- toiles de rue festival in Rabat on behalf of the EAC L’boulvart association.

H.E. Abdoulaye Diop is a diplomat, a skilled negotiator and a confirmed mediator with more than 20 years of experience. With solid experience and a track record of highly strategic and political positions at the national and international levels, Abdoulaye Diop holds a Masters in International Relations from the International School of Public Administration (Paris, France). He was Minister of Foreign Affairs of Mali. He served as Special Advisor to the Executive Secretary of the African Capacity Building Foundation (ACBF), a specialized agency of the African Union. H.E. Abdoulaye Diop recently served as Chief of Staff to the President of the African Union Commission. He has served as Ambassador of Mali to the United States, Brazil, Chile, Mexico, Peru, and Uruguay. He holds an honorary Doctorate of Public Service from Chatham University, Pittsburgh, Pennsylvania, USA.

Abdoulaye Konaté studied visual arts at the National Arts Institute in Bamako and then at the Higher Institute of Art in Havana (Cuba).

Konaté is moving towards a re-appropriation of endogenous plastic resources.

He uses materials such as textiles, eggs, sand. By inserting objects like gray-gray, bullets and used clothes, he endows his paintings with a third dimension: that of depth. Abdoulaye Konaté’s themes are inspired by geopolitical news.

His work questions the problems of racism, political corruption, ethnic and religious conflicts.

The artist has exhibited all over the world and in the world’s biggest biennials, including the current edition of the Venice Biennale.

His works are also shown at “Metropolis Africa Capitals” at the Grand Halles de la Villette (2017). In 2016, Abdoulaye Konaté exhibited at the Arken Museum in Copenhagen, Denmark. Abdoulaye lives and works in Bamako.

Passionate about theatre, he trained at the age of thirteen with Jean Makosso and Victor Nani. He participates in many workshops with Roselle, Lionel Pouliquen, Abel Sollars in Pointe Noire and also on the African continent. He perfected his training in France with Carlo Brandt, Jacques Perchet and with the JP Blachère association.

He took a few steps at the cinema and participated in about fifteen African festivals.

Aware that one can influence the environment to which one belongs, Pierre Claver also positions himself as a cultural manager: he directs and administers the JOUTHEC festival as well as his own cultural space YARO. He also initiates and organizes about ten tours in Africa.

Since 2005, he has directed the Pointe-Noire N’SANGU NDJI-NDJI International Music and Arts Festival.

He is very present on African cultural networks and in particular on the OCRE Network (Afaa/Afrique en Création). He obtained beautiful distinctions: Best direction (TCHIKUNDA Prize), Visa for the creation of Afaa, best cultural event 2006 / 2007 for the festival N’sangu NDJI NDJI.

Since October 2019 he is the President of Arterial Network.

Specialist in public management, he often collaborates with regional and international organizations in the field of governance of cultural diversity, culture & development and cultural policies.

He is member of the Board of Directors of the International Association of Research in Public Management (AIRMAP), member of the Steering Committee of Al Mawred Al Thakafy (Culture Resource, Cairo) and member of “U40 Network for Cultural Diversity”.

Deeply involved in the cultural debate in Africa and in the Arab region, he published several chapters in books and articles.

As a marketing teacher and researcher at IHEC Carthage (University of Carthage), Fatma Kilani is also a collector. In 2007, she founded La Boîte, an alternative, confidential art space belonging to a group of companies (Kilani Group) located in an industrial area of Tunis (La Charguia I). It is a research laboratory for the benefit of artists whose first mission is to support contemporary creation in Tunisia through the production of monographic exhibitions and their dissemination in different places and regions of Tunisia. Its second and no less important mission is to mediate these exhibitions with its target audiences, namely the employees of the Group of Companies to which she is linked, and the young students of Tunis and the regions where her action also extends.